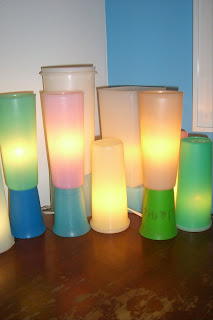 When I happened upon these glowing objects in the bedroom of Keith Bick and Keith Carollo, the guys behind all the fun at fredflare.com, I was immediately transfixed. Made out of Tupperware cups by their artist friend Tony Meredith, all I could think of was the packed of Tupperware my mother kept right next to the dishwasher. Inside were Jello molds with inter-changeable tops that would make the imprint of, say a Christmas tree or a Valentine’s heart right on the top of her wiggly dessert. There were also some square containers that she would store the leftovers of a “Busy Day Skillet,” or some extra chopped onions that were remnants from a taco fiesta. And then there were the plastic drinking cups, just like the ones on the dresser of the Fred Flare guys.

This sunny re-use of mundane kitchen objects also serves to brighten a corner of my own past When I was in fifth grade, drinking milk at lunch absolutely made me ill. I could drink water and I could drink juice, but no way could I choke down that smelly carton of milk that the lunch ladies brought on trays to our classroom just before the food cart rolled up to the door. Instead, I brought my own beverage to school in a cup just like one of these, and would sip from it, feeling special from the other kids gulping down their milk, as I wolfed down a chicken fried steak or a slice of Texas toast. Since my Tupperware cup cleaned in the hot water of the dishwasher, the lids were often warped, and they sometimes leaked whatever I might have brought for the day: apple juice, fruit punch or even not-so-iced tea.

When I look at this creation, I notice the name of a little girl, Melanie, on one of the cups. I imagine her mother wrote her name in Magic Marker around the perimeter of the cup, just in case it should to be separated from its owner. Maybe Melanie couldn’t drink milk either. Or maybe she was from a large family and her mother was trying to keep from doing to many dishes. Either way, this bright creation certainly jogged an old childhood memory.
Posted by The Elegant Thrifter at 4:47 PM