From Prison, With Love 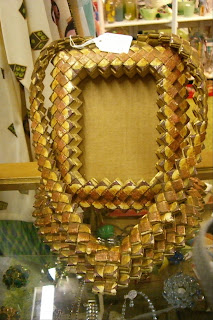 As you'll learn, I'm an avid thrift store shopper. I love things that evoke memories, pique my imagination and offer an original spin on any project I may be undertaking.

So when I bumped into this odd object at Kansas City's River Market Antique Mall while on a fantastic thrift hunt with photographer Bob Greenspan, I was initially spooked. This slinky, heart-shaped picture frame appeared to be made out of snakeskin and was perched upon a glass display counter surrounded with gilttery, costume jewelry.


As I slipped in for closer inspection, I realized that the entire piece was crafted from tiny pieces of Camel cigarette wrappers, woven together just as a child would have done to make a chewing gum-wrapper chain. This intricate example of handiwork is what some people call prison art, not a subject of which I'm knowledgeable. This frame is believed to have been created by someone behind bars who used whatever he could get his hands on to make this specimen of beauty for a special someone.

I like to imagine this frame was made by a prisoner back in the 1960s and at one-time held a beloved black and white image of its creator. It might have sat on Dear Mother's dressing table or at the bedside of a sweetheart back home. Either way, this object of desire was crafted with love.

What do you think?

Stan
Posted by The Elegant Thrifter at 1:42 PM

One of my favorite thrift stores in town.

And the River Market.....next best thing to heaven for me. It's where I go when I want to be "among the dust of the people".

Sunday's flea market at the river market is also filled with fun finds.

We must wander the River Market next time you're in town!