The Find: A Pot of Memories 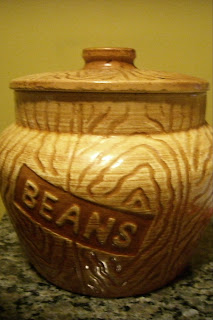 I have admired this brown-lidded bean pot from my parents’ home since I was a kid. I don’t specifically remember eating any beans prepared in it, but I do remember savoring one of my mom’s specialties from it, bubbling to perfection: green rice casserole.

That’s one of those 1970s dishes that involves mixing white rice with frozen broccoli, adding a can or two of Campbell’s cream of mushroom soup, and then topping it off with a handful or two of crushed Saltine crackers. My mom only made this dish on special occasions, but when she did, I can honestly say that every last creamy drop was scraped out of this bean pot, whose color and texture is inspired by the skin of a cooked pinto bean.

A few years back I admired the old bean pot that had been retired to an upper shelf in Mom’s kitchen cabinets. I told her that if she ever decided to get rid of it, I would like to have it. I never really thought she would actually send it to me, but then one day a cardboard box arrived at my apartment building. I recognized the return address from my Independence, Mo., childhood home. When I cut off the tape, opened the box and pulled out the wrappings, the old bean pot was unveiled. (It’s a wonder it made it all in one piece, considering that the box was practically crushed, and it was lightly surrounded in paper towels and a sheet of bubble wrap!)

When I turned the pot over, Mom had written in black marker,” Wedding Present, July 1, 1962.” That was the year my parents married in Mansfield, Mo. Reading those words endeared me even more to this old bean pot.

I do, on the special occasion, serve baked beans in the old bean pot, but I rarely put it in the oven for fear that because of its age, it might break. For the most part, it sits in a safe corner of my kitchen atop a crocheted trivet my garage-sale shopping pal Ruth Handel discovered on one of her treasure hunts.

I missed my Mom and Dad’s anniversary this year. (It was July 1, and for some reason my brain was all discombobulated, confusing anniversaries with birthdays, confusing several momentous dates not only by days, but by months! Just ask Ruth who got an anniversary card near her birthday.) But every day I think of Mom and Dad, and am reminded of their special day 46 years ago by this lovely, old bean pot.
Posted by The Elegant Thrifter at 1:56 PM