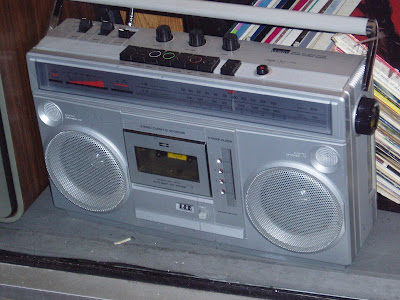 Nearly 30 years ago, way before anyone ever imagined an iPod or playing music from a compact disc, this music maker was at the height of technology. Just owning this cutting-edge music box of its era made me feel like a techie of the late ‘70s. I could play all my old 8 Track tapes of Dolly Parton, Tanya Tucker, The Bay City Rollers, John Denver and Foreigner, but also the newer cassettes, many of which I recorded from my turntable after I rigged it up to my main stereo.

I felt like a Mr. Dee Jay as I created mixed tapes and carted my music with me wherever I went. I was a hero to my eighth grade English teacher, also the pep squad sponsor, who needed a performance tape of Dan Hartman’s “Instant Replay” from a 33 rpm LP remix.

She played my bit of music magic during one of the Star Steppers performance during halftime at Bridger’s basketball team’s home game.

So when I started driving at age 16, my dad allowed me to take his 1977 four-door Chevy Chevette on the road. At the time, I worked as a photographer at Worlds of Fun, a popular amusement park in Kansas City, but much to my disappointment, the car only had an AM radio. To fill the music void of a 25-minute drive to and from the park, I plopped my music box on the floorboard of the back seat. And that first summer, I piled friends into the car and drove all over Kansas City rocking out to mixed tapes of Pat Benatar or the whole Styxx “Paradise Theater” LP, both recorded from my oh-so-advanced home electronics system. 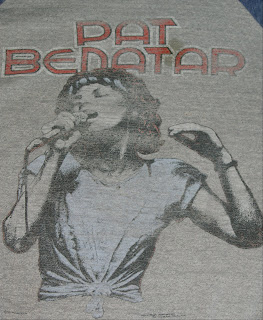 (And of course I bought this T-shirt when she performed at the Kansas City Municipal Auditorium in 1981!)

I carted my mobile music with me on the first summer away from home at Blair Academy’s journalism program in Blairstown, N.J. That was just before my senior year in high school, and I had never mixed with so many other students from all over the country. I felt super cool when a guy from New York gave me East Coast cred when he heard The Go-Go’s “Our Lips are Sealed” tape cranked up in my dorm room. Every where I went, I took my stereo, even after the antenna snapped off and it started gobbling up some of my favorite tapes.

Soon after, I put a radio with tape player in my car, stepped up the stereo system in my bedroom to one that had a cassette recorder, and forgot about the old boom box relegated to do a dark space in the closet. The last time I remember seeing the old Montgomery Ward music maker, it was splattered with paint, most certainly from one of my dad’s fantastic home painting projects where it continued to entertain for several more years.

But then the other day I witnessed an electronics reincarnation. In a shop window display on lower Broadway was a pristine version of the old Montgomery Ward boom box, identical to the one I unwrapped on Christmas Eve so many years ago. I thought about how much I cherished the old piece of technology and how it made music accessible to a kid who dreamed of worlds beyond his Midwest home. And I thought of how Mom and Dad worked so hard to make sure my sister and I always had whatever we desired.

I reached into my jacket pocket, grabbed my iPod, and wheeled over to Pat Benatar, where the first song that popped up was “Precious Time.” I snapped on my headphones, cranked up the volume and rocked the rest of the way home. As I bounced into the lobby of my apartment building, the doorman wrinkled his forehead in surprise and a woman with grocery bags seemed annoyed by the loud noise coming from my headphones. I ignored them, just like the 17-year-old would who took over my body for a few fleeting moments.
Posted by The Elegant Thrifter at 11:10 AM

What a beautiful tale...I love it. It reminds me of when I got my first boom box in the 80's. I just had to pose with it wearing my suede pumas and fat laces. On Friday nights I would get my tapes and tape Mr. Magic and Marley Marl on WBLS in NY...those were the days.

Thanks for the memory.