When I tell people I've spent nearly the past 10 summers on Fire Island aboard a 1966, 44-foot, wooden Chris Craft Sea Skiff called “The Luxor,” they quite often don’t believe me. “How come I’ve never been invited out,” is the common response, even among my closest friends. 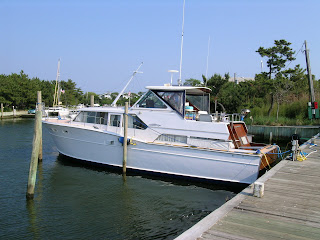 (See, she really does exist!)

The reason few friends ever get invited aboard the “The Luxor” is that she’s a temperamental old gal, and I worry that people who’ve never encountered boat living first-hand sometimes might not get it, or even appreciate it. Being aboard “The Luxor” is nothing like taking a Princess Cruise. When it rains, the beds in the aft cabin often get drenched. Quite often, either one, or sometimes both, of her toilets are out of order, and she’s been known to blow a fuse, leaving us in the dark at crucial hours in the evening. There’s always a special trick new guests have to learn to successfully flush the toilet

“The Luxor” spends most of her life docked either in Sayville, L.I., or in the Pines, since taking her out for an expedition can prove trying, to say the least. We’ve lost radar reception in huge patches of fog, had one or even both engines go out, usually with a gigantic ferry on our tail. The phone and TV reception is almost non-existent, and forget about jumping on-line with an Internet connection. Oh, and the space is cramped. I sometimes compare living on "The Luxor with that of camping on a floating RV.

However, despite her thirst for expensive gas (she holds nearly 400 gallons and gobbles it by the second when she’s cruising), her age spots and tight quarters, I can’t imagine spending a summer without her. On weekends, I count the days until it’s time to head out to the island, remove her canopy and perch dreamily on her deck, watching the trees quivering in the breeze and deer daintily nibbling the greenery of a neighboring house’s landscaping.

Just like the fleeting summer, we know there’ll be a day when “The Luxor” is no more. I hope never to witness that moment, but when it does, she’ll take her place among my fondest summer memories: the sensation of that first dip in the Mediterranean, the taste of my Grandpa Williams's Arkansas tomatoes, family trips to Florida and Tennessee packed into a 1977 Caprice Classic, a pig roast and a homemade, Fourth of July fireworks display in Grandma Churchill’s yard, or snapping old-time pictures at my summer job at Worlds of Fun.

These summer memories, more vivid in my mind than any detailed photograph, are ones that I’ll forever cherish.
Posted by The Elegant Thrifter at 12:33 PM