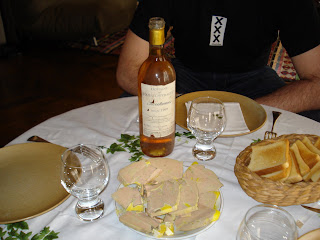 Everytime I buy a ticket to Paris, I always look forward to staying with my friend, Catherine, in her 18th Century flat in the 11th arrondissement of Paris. Everything about the flat, from its wood-beamed ceilings and its sunny street views, to its location -- right on the edge of Le Marais, next to the Cirque d’Hiver and between Place de la République and la Bastille -- make it the perfect Parisian locale. And then, of course, Catherine is a fantastic host, full of energy to meet the challenges of a New Yorker who (sometimes) wants to do all and see all. I say sometimes, because the best times are spent leisurely soaking up the surroundings of her neighborhood and relishing a welcomed change of culture. (Look at this spread of pate that greeted our arrival on a recent visit!)

Not only is Catherine up on what’s happening around town and willing to re-visit places she’s experienced hundreds of times, she is also prepared for almost any minor emergency that should occur. That’s why I marvel over the cabinet of products in her WC. It’s a collection of sorts. 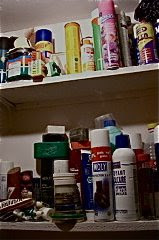 I love the preparedness it represents, with its assortment of air fresheners, surface cleaners and laundry detergents -- a quest for clean in many scents and colored containers.

Step in gum? Catherine most certainly has a product to remove it. Break the handle of a mug you bought as a gift? Oh she has a super-strong glue to repair the disaster. Need to polish your shoes? She’s got several colors to choose from. Spill red wine on a pair of khaki paints? The solution to your problem is just meters away.

In May 2009, Clarkson Potter will publish my book, The Find: The Housing Works Book of Decorating with Thrift Shop Treasures, Flea Market Objects, and Vintage Details
Posted by The Elegant Thrifter at 8:12 PM No comments:

The Find: Rise and Shine! 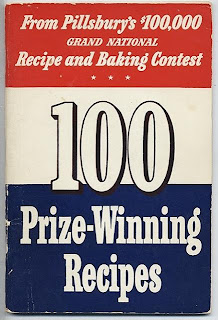 One of the most difficult temptations for me to resist at thrift stores or garages sales is flipping through the crumpled pages of old cookbooks and ogling the Technicolor images of all those culinary creations laden with canned fruit, shortening and processed cheese. Within my own cookbook collection are Betty Crocker’s “Frankly Fancy” Foods Cookbook from 1959, a Joys of Jell-O volume from the 1970s, and several editions of the Pillsbury Bake-Off offerings; my favorite, of course, being The Pillsbury Busy Lady Bake-Off Recipes from 1966 with the famous Tunnel of Fudge bundt cake oozing molten chocolate on its cover.

While strolling what’s left of New York’s East Village, I was reminded of my own cookbook collectiob when I spied a TV tray loaded with decades of ephemera just around the corner from St. Mark’s church. Right there, among an old racetrack pamphlet and an unidentified group photograph from the 1930s, I discovered the day's pièce de résistance: a program from the 1949 Pillsbury-sponsored Grand National Recipe and Baking Contest Award Luncheon at New York City’s glamorous Waldorf-Astoria. (Later, the name of the competition was changed to what it is known as today, “The Pillsbury Bake-Off.) 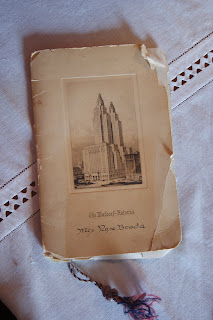 On December 13, 1949, hundreds of ladies all decked out in their big-city hats and pearls, packed the Waldorf’s Starlight Roof to witness which recipe earned one homemaking hopeful a grand prize of $100,000! Within this found program’s yellowed pages, all the finalists’ names are listed along with their home addresses, but it was Theodora Smallfield from Rockford, IL, who stole the show with her “No-Knead, Water-Rising Twists. (The recipe is still available at www.pillsbury.com. ) This program, still containing a note slipped inside reading, “Best Wishes from Ann Pillsbury, “ must have marked the table of a Mrs. Rose Broda. Her name is gracefully written in calligraphy under the black-and-white photograph of the stately hotel. 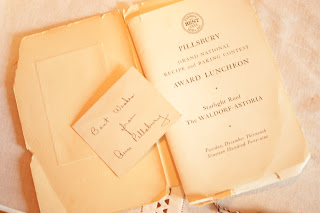 This roomful of excited guests dined upon a ritzy menu that included stuffed pear royale with crabmeat and topped with caviar; hearts of celery; ripe and green olives; salted almonds and nuts; breast of native guinea hen on sugar cured ham and wild mushrooms under glass; Minnesota wild rice; new string beans sauté; Pride of Virginia ham on leaves of lettuce and then that’s not even including the copious dessert selection topped off with a demi tasse, probably a delicate shot of espresso in today's lingo.

Just looking through these old cookbooks reminds me of some of my favorite home-cooked meals, of which none of the recipes were even written on paper: Grandma Williams’ fluffy biscuits, Grandma Churchill’s gooseberry cobbler (when her poor eyesight didn’t cause her to mix up the sugar with the salt!), my mother’s cornbread dressing laced with lots of sage, and my Aunt Lou’s dinner rolls. And then there’s the Tunnel of Fudge cake I remember stealing the show at Dad’s school functions, many a Christmas gathering and several birthday parties, always quick to disappear once a knife broke through its surface. 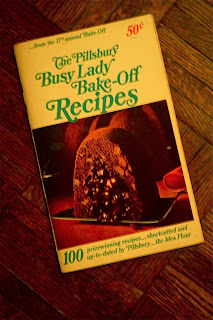 This cake, concocted for the 17th Annual Bake-Off, still induces giggles with its funny name and mystifies diners with its runny center. And more than 40 years later, whether its presented at a snooty Manhattan brunch or a simple, down-home get-together, it remains a time-honored crowd pleaser!

In May 2009, Clarkson Potter will publish my book, The Find: The Housing Works Book of Decorating with Thrift Shop Treasures, Flea Market Objects, and Vintage Details.
Posted by The Elegant Thrifter at 10:31 PM No comments: 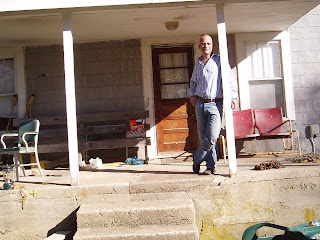 Sometimes even the most beloved family treasures end up in the most undignified places. But thanks to my dad’s keen eye on a garbage heap near my Grandma Churchill’s old home, this once-rusty metal glider now sits as good as new on his and Mom’s back porch in Independence, MO.

(Here's a picture of me on Grandma Churchill's front porch taken a few years back. You can see the glider over my left shoulder.)

This simple red and white glider has occupied the same corner of Grandma’s front porch way out in the country between the tiny Missouri towns of Mansfield and Ava for as long as I can recall. It has served as prized seating for churning homemade ice cream, viewing amateur Fourth of July fireworks displays, cuddling warm beagle puppies and rocking babies to sleep. Mom remembers the glider residing in the same spot since the time that she and Dad were dating. (And they were married in 1962!) And I imagine this old glider has facilitated its share of after-dark smooch sessions within its gentle swing and its cozy-for-two accommodations. For my grandmother, this purchase must have been pure luxury, since making ends meet on meager profits from a dairy farm was a challenge even in those days. Mom thinks Grandma Churchill probably bought the glider at Roger’s Furniture Store, which she says used to sit on the old Mansfield town square. I pulled this picture of the main street during Wilder Days, an annual celebration in honor of hometown hero, Laura Ingalls Wilder of the Little House books fame, from www.mansfieldcommerce.com.

It's to my dad's credit that this old relic from the past, with a fresh coat of paint and a few new nuts and bolts, continues a sparkling existence. Gone are the rusty spots of flaky paint that nearly sent this piece of furniture off to an eternity in the local dump. Now, it shines in the sun a generation later on yet another porch where it once again gracefully glides. 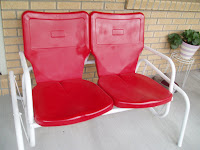 In May 2009, Clarkson Potter will publish my book, The Find: The Housing Works Book of Decorating with Thrift Shop Treasures, Flea Market Objects, and Vintage Details.
Posted by The Elegant Thrifter at 4:02 PM 3 comments:

Reuse and Repurpose: The Plastic Princess 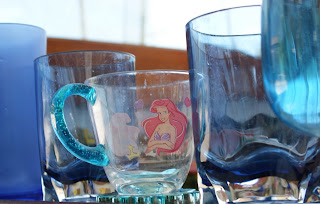 Memories linger in so many of the collected items we’ve amassed over the years on Fire Island aboard "The Luxor," a 1966 wooden Chris Craft Sea Skiff where we spend our summer and early-fall weekends.

I thought about these plastic drinking glasses today, since an impending storm has dashed our plans to head out to the island this weekend. While aboard "The Luxor," we don’t cause too much of a fuss with dishes. Sometimes things break, or other times they walk off with a passing guest, hence the mix-and-match nature of our tabletop selections.

Even though they’re just plastic vessels, these glasses always remind me of the special times they’ve celebrated. A weekend guest offered a set of colorful goblets a few years ago, but only three of the four still exist. As I recall, the missing one went overboard during a late-night cocktail gathering. The solid blue, every-day glasses were a gift to our captain, Robert, from one of his sisters. And while they are just plastic, we still have to be aware that when we mix cold ice with a room temperature drink in them, they have a tendency to crack! And then there’s the Ariel princess mug that arrived a few years back in a pair when my boat mate, Veli, celebrated a double birthday with our pal Eleanor. Last year, the base snapped off one, leaving its partner to reign as the preferred drinking glass for whomever might seem deserving of a royal moment.

These glasses have seen better days, but I'm drawn to their casual character as they seem to happily coordinate without even trying So every time we reach to them to raise a toast, whether it’s with fine French champagne or Diet Pepsi from a can, it’s with the love of knowing we’re surrounded by family and friends....and a princess of course!

In May 2009, Clarkson Potter will publish my book, The Find: The Housing Works Book of Decorating with Thrift Shop Treasures, Flea Market Objects, and Vintage Details.
Posted by The Elegant Thrifter at 2:51 PM No comments: 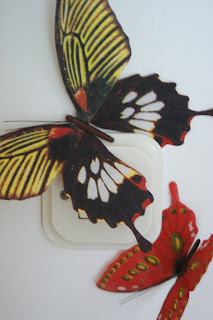 Even when traveling across the globe, moments present themselves when you’re reminded of home, especially when you are offered a gift tailored to your favorite memories.

That’s what happened a week or so ago during a two-week vacation in Croatia. The highpoint of this visit took place on the Northern Croatian coast where we made our base in Rijeka at the home of my design/art student friend, Marino Krstacic-Furic. (Sorry Croatian readers…can’t seem to get those accents to come out on my tired old computer!)

Marino’s bright and airy apartment is so full with heart-felt décor that I’ll be sharing it with you in future entries of The Object of My Desire. His knack for color and his original eye for quirky design solutions makes for an inviting space that’s definitely difficult to leave.

So having read one of my past blog entries about the Dolly-Rama party I threw back in March to celebrate the launch of Dolly Parton’s Backwoods Barbie CD, Marino noticed that I tapped into a butterfly theme to anchor the evening and decided to make me a framed piece based on one of my favorite motifs. (Now Marino must like butterflies, too, because I spotted some hovering around a light switch in his office area.)

The design he created was drawn on the unprinted side of a box of chocolates, which seemed absolutely appropriate knowing Marino’s impressive sweet tooth. He then manipulated the image on his computer to create a flurry of activity in black and white, and finally printed the design out on the back of another candy box. 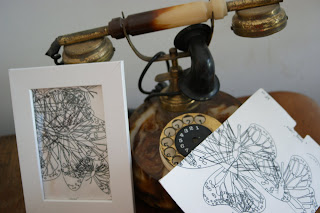 Butterflies flit around, going about their business without bothering anyone. While you’d definitely swat at a nagging mosquito, you’d never shoo off a butterfly. They are tempting and seductive, and prompt possession. But if you grab at their delicate wings, you only inflict irreparable damage. My visit to Rijeka, like those last few fluttering creatures spotted on a late summer day, soon flew off into the past. But I’ll remember my stay in Marino’s home every time I gaze upon these alluring beauties preserved forever in black and white.
Posted by The Elegant Thrifter at 5:20 PM No comments: