The Find: Out of the Blue 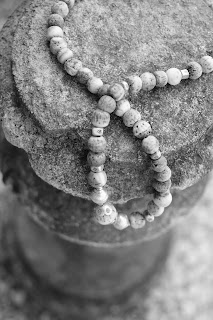 While vacationing on the Istrian coast of Croatia this summer, I found my mom’s birthday gift sitting in a jewelry maker’s shop in the town of Rovinj. The artist, Radovan Sredic (www.radovanart.com), was twisting and turning away on a silver ring as I admired his work on display. Eventually, I settled on this blue coral and Sterling Silver creation very similar to the one that lured me in from the street.

Sredic told me that blue coral, such as this specimen found near the island of Krk, was becoming an exceptionally rare find, as over-harvesting and pollution continues to wreak havoc on the quickly disappearing coral reef. He assured me that his pieces were carefully located and removed in a way that didn’t keep the lovely, living animal from regenerating healthy stems in the future.

I was fascinated by the beads’ blue hue, reminiscent of Mom’s blue eyes. And I loved that silver accents that provided an Eastern touch to these textured spheres. I took these photos on the terrace of my friend Marino’s apartment in Rijeka, and didn’t realize until later that I had my camera in black-and-white mode. I still like the effect of the whimsical beads rolling off of the side of an architectural element Marino salvaged and placed on his sun-drenched terrace.

So now every time Mom wears her coral beads, she’ll have a tiny bit of the Croatian coast gracing her neck – underwater finds that are as rare and exceptional as a Mom like she.

In May 2009, Clarkson Potter will publish my book, The Find: The Housing Works Book of Decorating with Thrift Shop Treasures, Flea Market Objects, and Vintage Details.
Posted by The Elegant Thrifter at 3:07 PM

Sons are just so fabulous.....

And yes, her blue eyes are mesmerizing. In a soft and gentle way.