You learn so much about people when you enter the spaces they’ve decorated with care, putting their heart and soul into every detail they’ve mined from within. Creating a home that expresses character and charm is a personal journey --– one that taps into the sensibility of the inhabitant and reveals a personal expression of the one who dreamed it.

Since entering into a one’s private world is considered such a sacred admission, I was amazed that when writing my book, The Find, out in May 2009, with the openness with which people who live in those inspiring spaces, accepted me into them with grace, allowing me to explore the nooks and crannies of their intimate expressions, and, ultimately, to have them photographed for my book.

One of my favorite stories on my journey to The Find centers around the infinitely talented David Jimenez, the vice president of visual merchandising and store design for Hallmark, the world renowned maker of greeting cards based in Kansas City. He also happens to be one the most creative home decorating experts I’ve met over the past year.

During the summer of 2007, I was home visiting my family in Independence, Mo., and I just happened to pick up the current issue of House Beautiful, marveling over the recent changes the magazine was making, when a spread stuck me. It was the interior of a stately 1906 Georgian Revival mansion, decorated with taste and creativity, and it happened to be only a few miles away in the historic section of Hyde Park in Kansas City.

I immediately flipped straight back to the resource pages, and there was an email address listed for David, and I dashed off a quick note telling him I was in Kansas City and would love to see his home in consideration for my book. A few hours later, my mobile phone rang with a San Francisco number popping up on the screen. I thought it was a friend who lived out there, but in fact it was David, who was just returning home from a West Coast trip, and he would love to show me his place.

Now David had no idea who I was, nor should he. Here I was a complete stranger calling him asking him if I could come to his house! From the moment I passed through the stately columns of the house’s entry and was greeted by David’s welcoming smile, I knew his home was a special place that absolutely had to be included in The Find. David stressed to me that he is not a decorator, but his work is such a spectacular example of how to mix thrift, vintage and new furniture to achieve a space like none other. 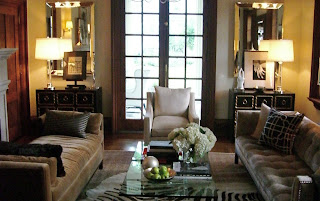 I’m sharing a couple of snaps I took on my first visit to David’s home. The photo on the left is of David's living room that takes inspiration from the idea of a moody and sexy Parisian salon. It opens up onto a sun-filled Portico where David took thrift-store wingback chairs, covered them in vinyl, and leaves them outdoors 365 days of the year. Below is a snippet of David's masculine bedroom, where he mixes fine antiques with thrift finds for ultimate comfort and visual appeal.

There are similar pictures of David's Kansas City jewel-of-a-home in my book, which are expertly shot by Kansas City lens man Bob Greenspan, but those are under lock and key until May 2009. Until then, visit David’s website at www.djjimenez.com to see David’s fantastic work for yourself. 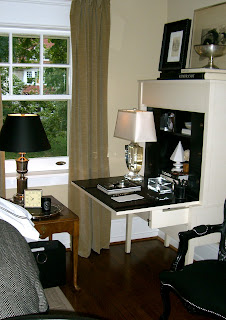 In May 2009, Clarkson Potter will publish my book, The Find: The Housing Works Book of Decorating with Thrift Shop Treasures, Flea Market Objects, and Vintage Details.
Posted by The Elegant Thrifter at 11:39 AM

I enjoy reading his articles. Kansas City Spaces is a beautiful magazine that makes me proud to be a native Kansas Citian.

And Hyde Park....that's nearing my 'hood. I live in Old Hyde Park and love passing by these beautiful, established dwellings.

Thank you for giving me a peek inside.