Divine Inspiration: In Bed With The Empress 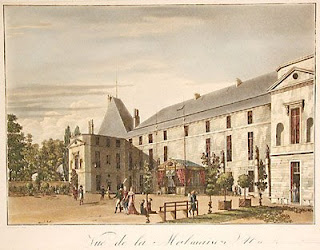 A home that’s decorated with love and attention is sure to endure the ages, even when the owners have long packed their bags and fourtunes shifted with the tides of time. I credit decorator Mark Ciolli, principal of the design firm Carl & Co. (http://www.carlandco.com), for introducing me to such a home – one where original details have been exquisitely restored, and the glamour and the glory of Napoléon Bonaparte and his beloved Joséphine continues to reign.

My friend Catherine and I recently took a train and a bus to arrive at the royal residence of Malmaison, located on the outskirts of Paris. At first, the name doesn’t sound so appealing, with the word mal taking prominent position in its name. But despite the label, Malmaison is a lasting testament to the adoration a couple shared for each other, even after Joséphine was forced to divorce the emperor in 1809 when she was unable to produce an heir. 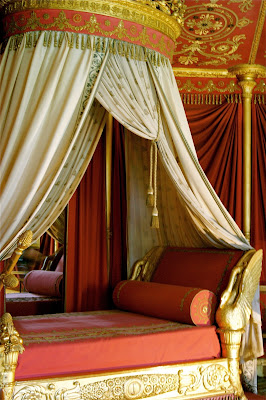 While married, Napoléon and Joséphine acquired Malmaison in the late 1800s, and the husband left it to his wife the responsibilities of renovating and redecorating. As any royal would, she enlisted the top architects of the day, Percier and Fontaine, to provide luxurious details and sumptuous décor – all the efforts of which blew her budget. Upon his return, Napoléon clearly forgave his wife for her extravagant decorating venture that turned Malmaison into what is still considered today a pilgrimage for the most serious decorators.

The richest of Malmaison’s décor is found in The Empress’s tented bedroom. While traveling in Milan during the summer of 1812, Josephine decided to have her old bedroom freshened up a bit by architect Louis-Martin Berthault. Imagine the delight she must have experienced upon discovering her new bed created by acclaimed furniture maker Jacob-Desmalter – one watched over by golden imperial eagles and flanked on either side by romantic swans and abundant cornucopias. 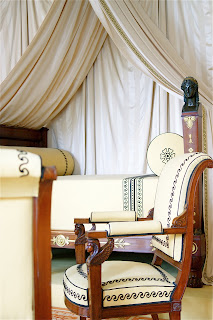 A more modest space, yet fresh and upbeat by today’s standards, is The Emperor’s Bedroom. The regal bed originally came from the Tuileries palace and was used by Joséphine’s son from a previous marriage, Eugène de Beauharnais. Once again crafted by Jacob-Desmalter, the busts of a lovely ladies realized in bronze and decorated in gold, must have kept the emperor in feminine company each night.

The yellow silk fabric with a black trim was just as at home in a royal residence in the 1800s as it would be today in a Palm Beach sun room. It exudes a bright outlook with its light creamy hue and a contemporary twist of bold, optical black trims, which are echoed in the facing draperies. 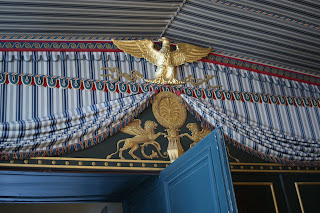 From the tented ceiling in the Counsel Room to the velvet covered, gold leafed chairs flanked by painted swans whose image of power is reflected in a coordinating, round Aubusson, the riches continue to flow at this glorious home, and the story of a couple truly in love still warms the halls of Malmaison. 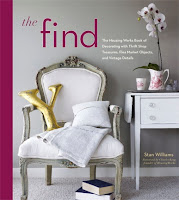 In May 2009, Clarkson Potter will publish my book, The Find: The Housing Works Book of Decorating with Thrift Shop Treasures, Flea Market Objects, and Vintage Details.
Posted by The Elegant Thrifter at 12:12 PM

mamaison, perhaps that's what I should call my Malibu home! I'm truly inspired, it's an object of my desire!