Reuse and Repurpose: The Mosaic Man 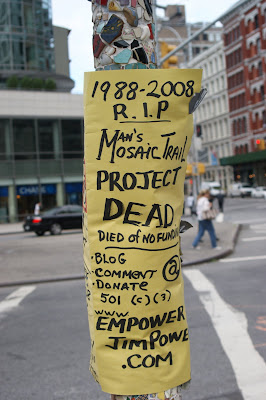 When I moved into an apartment in the heart of the East Village in the late 1980s, it was an artsy, rough-and-tumble neighborhood -- one that co-workers couldn’t believe I had decided to call home. “Don’t live any where east of Second Avenue,” one said, adding that it would also be prudent to stay out of Alphabet City, where then avenues take on A, B, C and D names. I had already chosen to live on Fourth Street between First and Second Avenues, so being a fresh-faced Midwesterner, those warnings only prompted my curious exploration.

In those days, Upper East and West Siders called it slumming when they risked going down to the East Village. Many of them -- investment bankers, advertising professionals and retail executives -- decided they liked it so much that they would just move in. They certainly were getting a bargain price for housing compared to their previous neighborhoods. Soon the phrase, “Die Yuppie Scum,” started appearing painted on sidewalks and smeared on building facades.

There was a mini-demonstration in front of a Gap store when it opened on the corner of Saint Marks Place and Second Avenue. You would avoid being noticed just looking in the window for fear you would be confused with one of the hated, capitalist traitors new to the neighborhood. In those days, I worked in the Wall Street area, where a woven shirt and tie in the office was required. So before leaving my apartment every morning, I would tuck my tie into my black and red French messenger bag so I wouldn’t be mistaken with the offensive invaders. 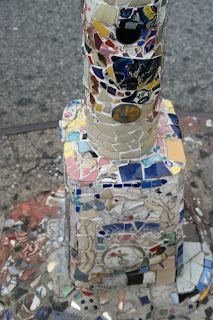 The summer of 1988 was the time of the Thompkins Square Park riots, where police on horseback and in riot gear tried to force skinheads, punks and homeless people out of the park, which was the centerpiece of gentrification in the neighborhood. I remember phoning my poor dad on that early August afternoon, with police helicopters hovering over my building, keeping watch for any breakouts of violence in the streets. That September, I discovered Wigstock, the fabulous drag extravaganza made famous by the iconic The Lady Bunny, and a stimulating music and arts scene that I had never experienced back in Kansas City.

It was also the summer I noticed beautiful mosaics popping up on light poles around the neighborhood. Made of broken pieces of glass, china and pottery, these fanciful mosaics brought a cheery softness to the street, and a sense of surprise when discovered practically out of nowhere.

For some 20 years, Jim Power, a homeless Vietnam Vet who lives in a tent in the street, has personally decorated and maintained the East Village Mosaic Trail. But its time may have come to an end. According to Power on his blog, http://empowerjimpower.blogspot.com, he can no longer afford it. “Too much for one guy and a dog Jessie Jane to handle,” he says in a blog he posted at the end of October, noting that he spent $2,000 a year maintaining his art, only to make $200 in return. “What a joke,” he adds, but “just remember, I was willing.” 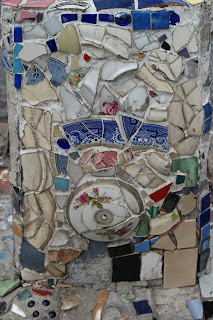 My hope is that someone will step forward to save Power's art. Every time I see one of his other-worldly creations, I feel comforted knowing that he preserved the beauty of what might have been a delicate tea set that accidentally got knocked off the table or a funny face salvaged from the demise of a vase that tumbled off a mantle. One man’s destruction becomes another’s selfless form of self-expression – one that nurtures new life and that for yet another moment, is viewed as whole.

In May 2009, Clarkson Potter will publish my book, The Find: The Housing Works Book of Decorating with Thrift Shop Treasures, Flea Market Objects, and Vintage Details.
Posted by The Elegant Thrifter at 12:43 PM

I hope his art is saved! Please keep us updated as you hear about it.

I enjoyed this entry, Stan. It also further explained some of RENT to me! :)

But mostly, this has to be the most beautiful explanation of a 'mosaic' I believe I have ever heard.

What a fabulous thought to think that the brokenness of our lives, put back together in a different and creative way, makes it whole once more......