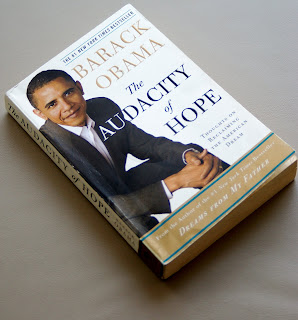 Back in March I was lucky enough to see Barack Obama speak at New York's Cooper Union. I found out about his appearance at the last minute and thought I would just show up and possibly catch a glimpse of him as he entered or exited the building.
I arrived about 15 minutes before the big event and approached the table in front and simply asked if there were any way I might get in. They directed me toward a small group of people standing along the park fence, and 10 minutes later, I was walking through the front door of the building.
The room was abuzz with people who couldn't believe they had made it in the hall. And as soon as Obama spoke, he captivated the room. There were people who gasped for joy and others who had tears in their eyes.I happened to have his book, The Audacity of Hope in my back pocket, and after his speech he signed it for me. 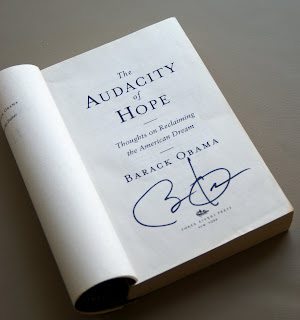 As I watched Barack Obama become the 44th President of the United States, I felt as if I were back at Cooper Union. I had a lump in my throat as I held the book Obama signed for me in my hand and I witnessed how the face of power in the the United States is truly changing...and most certainly for the good.
Posted by The Elegant Thrifter at 5:12 PM